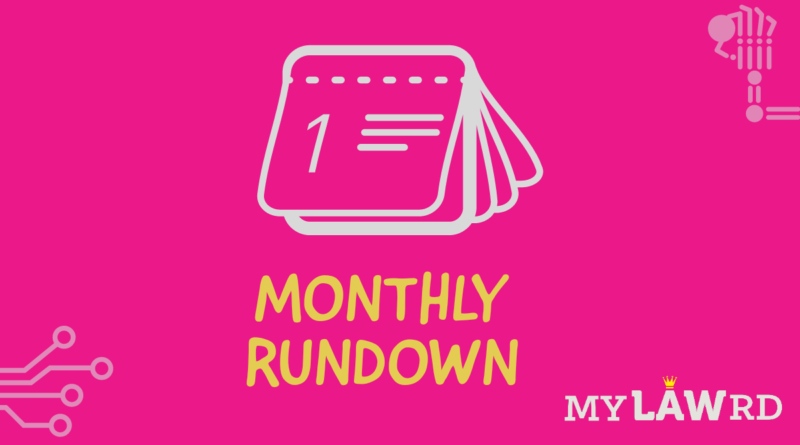 Hey there! It has been a long February, even without the extra 29th day. There have been so many developments in the technology policy, privacy, and fintech spheres. So here’s a recap of the technology law news highlights for this month.

Airtel gave its customers a lovely valentine’s day gift when it revealed that hackers had put the data of 2.5 million Bharti Airtel users on sale.

Tech giants have unveiled their plan to take over the world, bit by bit (See what we did there? LOL). Twitter has decided it does not need to “fully” comply with Indian laws refusing to block around 1000 accounts related to the farmer protests.

WhatsApp, braving headwinds of global backlash, has decided to push forward with its privacy policy. We applaud their courage. Definitely an embodiment of “go fast and break things”!

Facebook, has restored access to news content in Australia after it had banned Australian News pages over a controversial law requiring it to pay news media companies for publishing their stories. And why shouldn’t Facebook protest this proposed travesty? Afterall, who allowed the digital peasants to demand fair wages?

We think the Indian government is looking at these developments and responding as a typical Indian parent…more restrictions! It has released the critically important “Code of Ethics”, new rules for social media and OTT platforms including other significant social media intermediaries.

However, we would really appreciate if the government leads with an example and swiftly asks its customers to delete personal data of vehicle owners- all that it sold to them for crores of Rupees. It also needs to set higher standards in cybersecurity. The ‘Babu’ type work ethics don’t cut it anymore. A report recently suggested that Mumbai blackouts were perhaps a result of China sponsored hacking. And when a hacking group managed to breach their critical infrastructure and reached out to help them resolve their vulnerabilities, their emails fell on deaf ears.

Moreover, the ASCI has introduced guidelines for social media influencers to prevent misleading advertisements and claims. Somehow, though, we don’t think this will solve the problem.

At least, the government has finally restored 4G mobile internet services in Jammu & Kashmir! This is a victory for human rights!!! The internet is an unquestionable necessity today. How else will we tech-legal eagles make the big bucks if people don’t mess around on the internet? This ban was a violation of our fundamental right to life and freedom of work!

On the fintech front, The RBI on the other hand released the all so important master directions on digital payments security controls. Meanwhile, PayPal is bidding adieu to India by deciding to shut its domestic payment services from April 1. And its old pal Amazon was suggested to be stealing food from the mouths of small retailers.

The government is suddenly all gung-ho about crypto-currencies. A crypto-currency bill is slated to be introduced in Parliament soon. What’s more, the IAMAI is also on-board and has welcomed the government’s decision to create its own digital currency. The RBI, perhaps in preparation, has also released a master direction in digital payment security controls.

We don’t know how to feel about this. This country barely knows how to handle transactions on Paytm and UPI. Crypto-currency? We’ll take this with a pinch of salt.

The most unique development, by far, has to be the launch of the “Go Electric” campaign advising electric vehicles be made compulsory for officials. One can barely find petrol pumps on national and state highways. How does the government think we can recharge electric cars? And that’s just one problem in a long long list.

Last, but not the least, in a ‘settlement’ for privacy, TikTok has agreed to pay $92 million, and Facebook is paying $650 million to escape ‘lengthy litigation’. That’s one way to chest thumping acceptance of defeat and moving on.

That’s all the technology law news from February, 2021! See you next month!

Medha Gupta is an alumna of Symbiosis Law School, Pune. She is currently pursuing a Masters’s degree in International Relations from O.P. Jindal Global University. She is interested in the policy space relating to the information technology sector, focusing on information management systems and information infrastructures. She has good experience in content creation and editorial oversight.