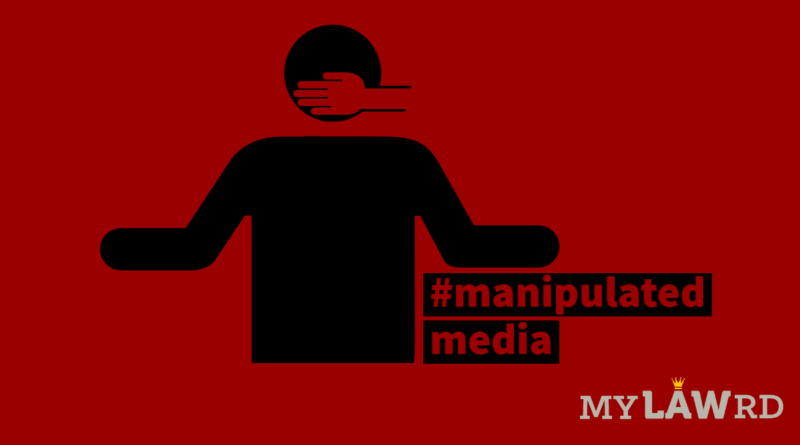 Twitter came out with a ‘Synthetic and Manipulated Media Policy’, with an aim to regulate content on its platform. According to Twitter, which rolled out the policy on March 5th, 2020, it wants to actively engage in combating misinformation on its platform. The policy allows Twitter to flag certain tweets as manipulated media. Although the policy may be a noble initiative by a popular Significant Social Media Intermediary, but sadly, this policy finds no legal basis in the Indian context.

Earlier this year, through a global survey, Twitter sought feedback from its users on how twitter should deal with manipulated media.  Twitter observes that around 90 percent of users, who shared their feedback, advocated that it should simply delete/ remove content that is synthesized/ manipulated. Things would have been a whole less complicated if Twitter had taken the feedback seriously and implemented it. But instead, it went a step ahead and introduced the ‘labeling’ rule. Twitter treads on murky waters when it scrutinizes and labels tweets, as it actively engages with the content being shared on its platform.

—Whether the content has been substantially edited in a manner that fundamentally alters its composition, sequence, timing, or framing;

—Any visual or auditory information (such as new video frames, overdubbed audio, or modified subtitles) that has been added or removed; and

—Whether media depicting a real person has been fabricated or simulated.

In order to flag a tweet as ‘manipulated’ content, Twitter also considers if such media is shared deceptively. To decide if a particular tweet contains deceptive material, Twitter literally resorts to stalking individuals and their profiles. Yes, you read that right. In order to determine whether the media has been significantly and deceptively altered or fabricated, the policy states that:

So one fine day if the Pope decides to tweet pictures of Natalia Garibotto’s beautiful bikini body, Twitter will visit the Pope’s profile and make a ‘judgment call’. It will decide that it is highly unlikely that the Pope will resort to such an action and likely conclude that such a tweet is deceptive- and label it. What twitter may not take into consideration in arriving at this decision is the fact that last year, the official Instagram Account of the Pope actually liked the Bikini model’s pictures.

But Twitter has no business in interfering with the Pope’s business of sending blessings virtually.

Twitter is projecting this policy as a great service to its users. Unfortunately, its actions, well intended or not, are not supported under the Indian law.

The law as it stands today allows intermediaries to act as neutral media host, where information may only be hosted or exchanged by users. As laid down in the Information Technology Act (“IT Act”), and the Shreya Singhal’s judgment, intermediaries can exercise control over user content only upon receiving ‘actual knowledge’, either through a court order or a government order mandating it to disable/ remove such information.

Most importantly, the apex court in Google India Pvt. Ltd. v. Vishakha Industries observed that this interpretation is important as it will prevent the ‘chilling effect on speech’. It rightly observed that if intermediaries are elevated to the status of super censors, it will denude the internet of its unique feature of a democratic medium for all to publish, access and read any and all kinds of information. Hence, any social media is simply not allowed to make a ‘judgment call’ in the first place.

Further, according to Section 79 of the IT Act, an intermediary will lose immunity if it selects the receiver of any transmission or ‘modifies’ the information on its platform. As per this policy, if in Twitter’s opinion the content circulated by the user is manipulated, it will append a label that the content is manipulated. It can be argued that Twitter is actively ‘modifying’ the information. In fact, when Twitter labels a tweet as ‘manipulated media’, then an impression is already created in the minds of the viewers about the information that is contained in that tweet. It can also be said that by actively adding to the content its own conclusion/ information based on its own judgment, it is fundamentally altering the nature of the original information.

A simpler example can explain this better. If a journalist writes a piece of news which is published in a daily, and if the editor appends his comments on how insightful the piece is, then such comment of the editor forms an integral part of the news article. The information that is conveyed to the readers is inclusive of the editor’s comment.

Going back to the basics

Twitter says it will implement the policy and exercise discretion with respect to the content with the help of its own technology or by receiving reports through partnerships with third parties. There are no details provided by Twitter on what these third-party partnerships are or the kind of technology it has deployed. But this leads us to wonder about yet another interesting scenario.

What do the 2021 Intermediary Guidelines say?

However, before it disables access or removes content, the social media intermediary must provide the user who has shared such information a notification explaining the reasons for such action. Subsequent to removal of content the user must also be provided a reasonable opportunity to dispute the action and such request must be decided within a reasonable time. But the rules do not provide for the intermediary to engage with the content, a tweet in this case, by flagging or labelling it.

In case you want something removed, here’s this template is the way to do it.