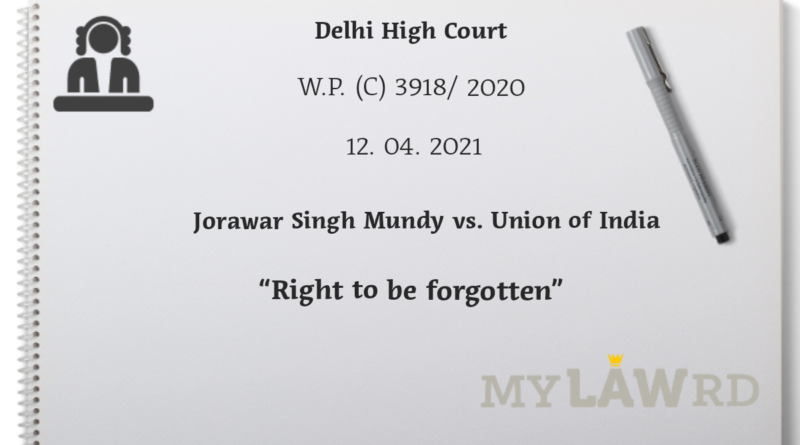 The petitioner, an American citizen, had visited India in 2009. However, a case was filed against him under the Narcotics Drugs and Psychotropic Substances Act, 1985. A couple of years later, a trial court acquitted him in its verdict dated April 30, 2011. In a ruling dated January 29, 2013, a solitary judge of the Delhi High Court affirmed his acquittal on appeal by the state.

After returning to the United States, the petitioner studied law and realised that he was at a significant disadvantage because the High Court’s decision was available on the internet. Details of his case could be found through a google search by any potential employer who wanted to run a background check on him before hiring.

Therefore, he sent notices to Google India Private Ltd., Google LLC, Indian Kanoon, and vLex.in. But only vLex.in withdrew the aforementioned verdict from its portal. When the judgement was not withdrawn from other platforms, he filed a writ petition before the Delhi High Court, requesting that the judgement be deleted from all respondent sites, respecting the Petitioner’s Right to Privacy under Article 21 of the Indian Constitution.

The Court framed the issue, if a Court order can be removed from online platforms? The court noted that the issue is one that necessitates consideration of the Petitioner’s Right to Privacy, as well as the public’s Right to Information and the preservation of transparency in judicial records.

The court reached a conclusion that the right to be forgotten is in tangent to the Right to Privacy. The court based its decision on the Supreme Court’s decision in K.S. Puttaswamy v. Union of India (2017 10 SCC 1), which recognized the right to privacy. It also relied on its own order in Zulfiqar Ahman Khan v. Quintillion Businessman Media Pvt. Ltd. & Ors [W.P. (C) 3918/ 2021]. The court had passed an interim order in this case to prohibit republication of the impugned article.

As a result, the court granted interim protection to the petitioner and ordered entities hosting the judgment to remove it. Indian Kanoon was ordered to prevent the abovementioned judgement from being viewed by search engines such as Google, Yahoo, and others until the next hearing date.

The Court has set a new hearing date- August 20th, 2020, and ordered the respondents to file rebuttal affidavits in the case, and rejoinders, if any.

You may read the order here.