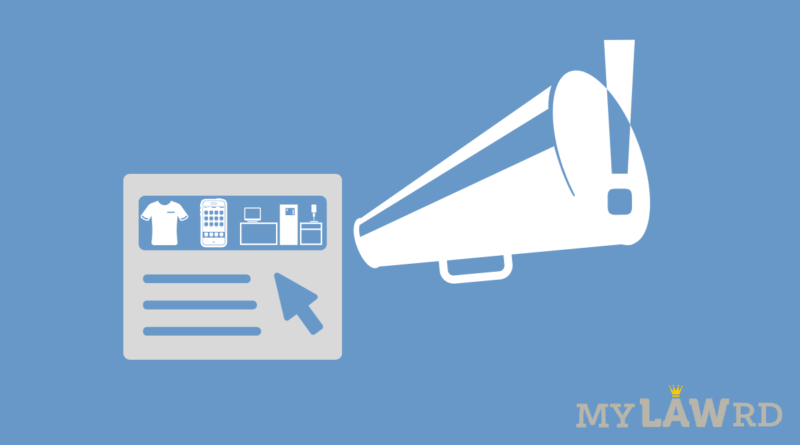 In recent times, marketers have started to come up with innovative ideas to reach the target consumers. Products in the market are being advertised and endorsed not only by celebrities but also by social media influencers on Instagram and Twitter. However, social media influencers are not necessarily very well informed about the product and could mislead the consumers. So, there are rules to penalize manufacturers, and influencers, for misleading influencer marketing tactics.

In Section 2 of the Act, the terms advertisement, endorsement, and misleading advertisement have been stated as follows:

“advertisement” means any audio or visual publicity, representation, endorsement or pronouncement made by means of light, sound, smoke, gas, print, electronic media, internet or website and includes any notice, circular, label, wrapper, invoice or such other documents.

“endorsement” in relation to an advertisement, means—

AUTHORITIES AND PENALTIES UNDER THE CONSUMER PROTECTION ACT

Chapter III of the Act revolves around the Central Consumer Protection Authority. This authority will be in charge of regulating matters relating to violation of rights of consumers, unfair trade practices and false or misleading advertisements.

In the event of any false or misleading advertisement, the Central Authority can issue directions and penalties under Section 21 of the Act. As per this Section, if the Central Authority deems, after an investigation, that an advertisement is false or misleading, and is prejudicial to the interest of any consumer, or is in contravention of consumer rights, he may direct the manufacturer/ endorser/ advertiser/ publisher to discontinue such advertisement. Further, the Authority may also impose a penalty of up to Rs. Ten lakh on the manufacturer or endorser. Subsequent contraventions may invite a penalty up to Rs. Fifty lakh.

In addition to that, Section 22 states that if the Director General, any other officer authorised by him or the District Collector believes that any person has violated any consumer rights or committed unfair trade practice or causes any false or misleading advertisement to be made then they may at any reasonable time enter into any such premises for searching the documents or record or article or any other form of evidence and seize the same.

Lastly, Section 89 of the Act lays down the punishment for false or misleading advertisement which is prejudicial to the interests of the consumers. It is stated that any manufacturer or service provider engaged in such an activity shall be punished with an imprisonment for a term which may extend to two years and with fine which will maximum go up to ten lakh rupees. However, if the offence is committed subsequently, then the term of imprisonment may extend to five years and the fine amount may extend to fifty lakh rupees.

In addition to the Consumer Protection Act, 2019, this Draft Guideline aims at regulating and keeping a check on misleading advertisements with the objective of protecting the consumers who may be exploited through such advertisements. This Guidelines applies to the manufacturer/ service provider whose products/services are the subject of the advertising/marketing communications, the advertisement agency and also the endorser of the product or service. Few important provisions of this Guidelines has been discussed below as follows:

What are the Conditions for a Valid Advertisement?

Rule 4 of the Guidelines states certain conditions for an advertisement to be valid as follows:

(1) should contain truthful and honest representations;

(2) not mislead consumers by exaggerating the capability or performance or service of the product; or present rights given to consumers by virtue of law as a distinctive feature of the advertiser’s offer; or suggest that the claims made in it are universally accepted of there is a significant division of informed or scientific opinion pertaining to such claims; or mislead about the nature or extent of the risk to consumers’ personal security, or that of their families if they fail to purchase the advertised product or service;

(3) should not be offensive to generally accepted standards of public decency in India and should not contain material which is likely to cause grave and widespread offence to the public.

However, while carrying out mass manufacture and distribution of goods and services, if an occasional, unintentional lapse in the fulfilment of an advertised promise or claim occurs, then such unintentional lapse may not invalidate the advertisement in terms of these guidelines: Provided that- (a) the claim or promise is capable of fulfilment by a typical specimen of the product advertised; (b) the proportion of product failures is within generally acceptable limits; (c) the advertiser has taken prompt action to make good the deficiency to the consumer.

Under Comparative Advertising, the advertisement will be permissible if it is factual, accurate and capable of substantiation. It should not present a good or service to be an imitation or replica of a good or service with a protected trademark or trade name.  In case the advertisements contain comparisons with products of other manufacturers, suppliers, producers, or competitors, it shall only be permitted if the advertisements promote competition by correctly highlighting the features of the competitor’s products.

As for Bait Advertising, the advertisers have been directed under the Guidelines to ensure that there is adequate supply of goods or services so as to meet the foreseeable demand generated by the advertisements. In total the consumer should not be misled about the market conditions.

Surrogate Advertising which means promoting a product of the brand on which advertising is restricted by promoting its subsidiary products has been completely prohibited by the Guidelines.

DUE DILIGENCE ONE MAY UNDERTAKE BEFORE DOING AN ENDORSEMENT

The Guidelines covers an important aspect with respect to endorsement of products. Rule 15 clearly lays down the honesty of statements and due diligence which is to be made by an endorser in relation to advertisements. The endorser has to ensure that:

Due Diligence for liability purposes would be deemed to be carried out under the Act if the endorser obtains advice from an advertising agency organisation or a legal opinion from an independent legal practitioner in relation to the authenticity of the statements and compliance with the provisions of the Act & the present guidelines.

Rule 18 of the Guidelines also states that in case the endorser has any kind of connection with the manufacturer, trader or advertiser of the product then a disclosure of the same should be made, however, if the connection is reasonably expected by the audience no such disclosure is required.

Therefore, to conclude the Consumer Protection Act, 2019, in its own lays down a strict mechanism to keep a check on misleading and false advertisements. To complement it, if the Draft Guidelines get implemented, a larger framework to control such defaulting activities by traders, manufacturers, service providers, advertising agencies, endorsers will come into picture.

Since you are here, wanna now more about the Consumer Protection Rights in India?