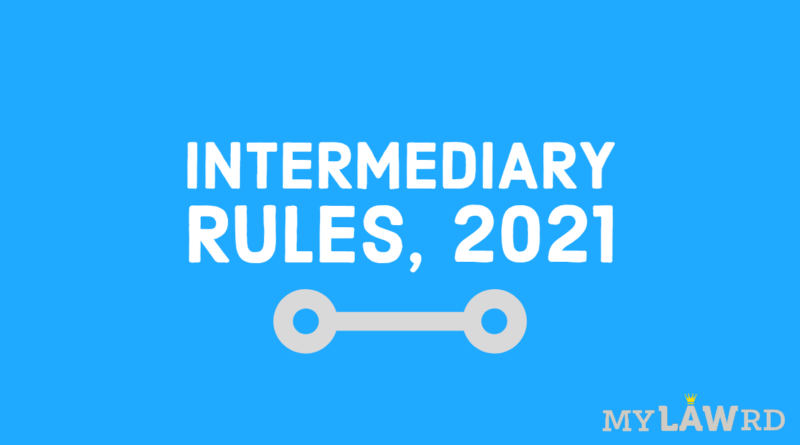 The highly anticipated new Intermediary Rules were finally notified in February. The govt. chose to name it ‘The Information Technology (Guidelines for Intermediaries and Digital Media Ethics Code) Rules, 2021. The name clarifies the intent of the government- to regulate intermediaries as well as digital media, of which Online Curated Content (OCC) Platforms are also a part. While the govt. tightened the due diligence norms for intermediaries, it also introduced additional norms for significant social media intermediaries. The rules mandated OCC platforms and Digital News Media to give way to a three tier grievance redressal mechanism, and digital news organizations were asked to also adhere to a new code of ethics. However, the rules were soon challenged in different High Courts. Ultimately, the Supreme Court stayed multiple proceedings in High Courts and transferred the petition to itself. Before the Supreme Court begins the hearing of the case, we thought it would be a good idea to apprise you, in short, the legal challenges to the new intermediary rules.

Rule 4(4) of the Rules lay that a significant social media intermediary “shall endeavor” to deploy technology-based measures to proactively identify information that depicts rape, child sexual abuse, or any information that has previously been removed on the resources of such intermediary.

This provision is borne out of the Supreme Court’s orders in Re: Prajwala Letter Dated 18.2.2015 Videos of Sexual Violence And Recommendations, Suo Moto Writ Petition (Crl) No(S). 3/2015. The Apex Court sought to ensure that videos depicting rape, gang rape, and child pornography are not available for circulation. The Court had created a committee consisting of representatives of the Govt., experts, leading technology companies as well as intermediaries. The order is to be credited for creating the cybercrime reporting portal www.cybercrime.gov.in. Facebook had even submitted in the court that it is developing a “proactive detection” technology for real time screening of content through artificial intelligence.

The challenge to the rules contend that the provision, read with Rule 4(4), mean that an intermediary would need to take down content that depicts nudity in general. Also, the petitions contend that the manner contemplated under this rule is disproportionate to the objectives sought to be achieved. E.g. law enforcement agencies reportedly compelled intermediaries to use automated tools such as PhotoDNA in criminal investigations, which were entirely unrelated to serious sexual offences.

The petitions also challenge the risks associated with these automated tools. These tools, first of all, are totally unaware of the context in which the content has been created. This could result in removal of content which even criticizes the unlawful act in question. Secondly, these tools have technological limitations. They are trained using data which mirrors our society which is influenced by biases. Such a mechanism violates due process, and there is no opportunity of hearing to the content creator.

Let’s start with Rule 4(4) itself. It has a proviso which says that measures taken by the intermediary shall be proportionate- having regard to the interests of free speech and expression and privacy of users. It also says that the automated tools shall be evaluated with regard to their accuracy and fairness, propensity of bias and discrimination, and the impact on privacy and security of such tools.

Then there is Rule 3(2)(b). It says that the intermediary shall remove content, which is prima facie in the nature of any material which exposes the private area of such individual or shows ‘nudity’ or is in the nature of ‘impersonation in an electronic form’, shall remove the content within 24 hours from the receipt of complaint by such individual.

This is exactly what the Supreme Court had restrained an intermediary from doing, in Shreya Singhal. Such rules are an attempt to overrule the effect of the law laid down in the case where the Court had read down Section 79(3)(b) and the Intermediary Rules, 2011. As a result, the provisions mean that an intermediary is required to expeditiously take down content only upon receiving ‘actual knowledge’ from a court order or on being notified by the appropriate government or its agency.

Overruling the Supreme Court here would allow intermediaries to perform the role of adjudicatory bodies. It places them as judges to evaluate the millions of requests they receive to disable access to online content. It is a risk to free speech, which is further aggravated because of the strict timeline for removal of content.

New rules are disproportionate and cause a “chilling effect”

The new intermediary rules (“the rules”) are vague and disproportionate- violating Article 14, 19, and 21 of the Constitution of India. The rules hit the right to free speech and privacy of an individual. E.g. While Rule 3 (2) (b) require an intermediary to remove information on the basis of the complaint of a user (a deviation from the law), Rule 3(g) require it to retain information regarding deletion of user account up to 180 days. Further, the rules go totally overbroad with Rule 4(2), which requires a social media intermediary to enable identification of the first originator, something which might break end-to-end encryption.

The gazette notification says that the government is notifying these rules as per power conferred by:

t remains a mystery as to why the Government did not use the more appropriate ISection 87(1) (y)- the procedures and safeguard for interception, monitoring or decryption under sub-section (2) of Section 69. The fact is that it used Section 69A, which confers a wider power to issue directions for ‘blocking’ for public access of any information. The petitions argue that the Section does not envisage tracking of originator. The petitions contend that the parent statute also doesn’t even contemplate the regulation of Digital News Media and OCC platforms. The objective of the IT Act, 2000, is to recognize electronic records and digital signatures to facilitate e-commerce. Neither Section 69A nor Section 79 aim to regulated digital news media or OCC content.

Subsequently, the three-tier adjudicatory mechanism introduced through Rules 9 to 13 is also ultra vires the parent Act. Also, it is an indirect attempt of the executive to bring digital news media under the purview of the Press Council of India Act and the Cable Television Networks (Regulation) Act, 1995, without amending either of these legislations.

The Part III, ‘Code of Ethics’ mandate the OCC platforms to self-censor. There is a mechanism to classify content based on the presence of nudity, sex, expletive, language, substance, abuse, etc. and mandates creation of access control and age verification mechanism to prevent viewing of such content.

All of these rules have been framed under Section 69A, which provides for blocking of information in the interest of “sovereignty and integrity of India, defence of India, security of the State, friendly relations with foreign States or public order or for preventing incitement to the commission of any cognizable offence relating to above.”

The Executive has overstepped

In simple words, the delegated rule making power must be consistent with the parent Act, and carry out the objectives of the Act. However, the requirements of traceability, regulation of digital news media and OCC, etc., are all indicators that the executive has perhaps overstepped. The three-tier grievance redressal mechanism, regulation of ‘current affairs content’ are all an unreasonable restriction to free speech. The three-tier structure doesn’t even have a provision to allow aggrieved publishers to appeal against/ judicially challenge the decision of the inter-departmental committee, which is once again made up of government officials.,

Note: This is the author’s account of various petitions filed in different high courts, which were available in the public domain.