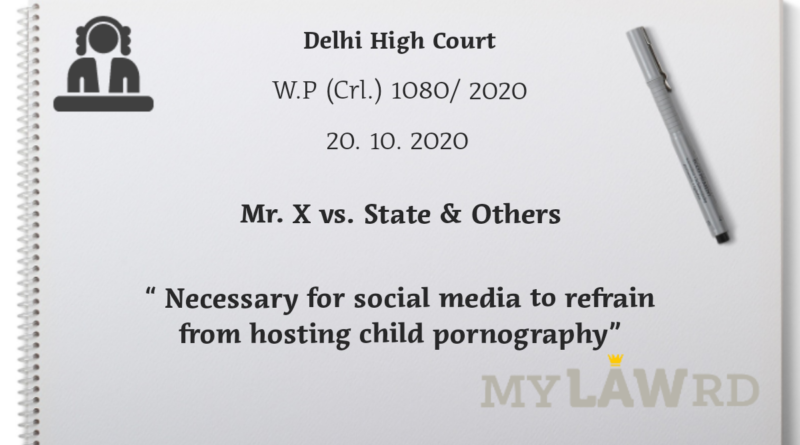 This case deals with online harassment and measures to prevent hosting/ sharing of harmful content on social media including child pornography. The plaintiff in the year 2012 became very close friends with a person who emotionally blackmailed her, by threatening to commit suicide, to leak intimate photos of her. Due to his abusive nature, she broke up with him. Later, when the plaintiff shifted to UK. The accused continued to call her. Since the plaintiff did not pick up the calls, he landed up at her residence in UK where again he assaulted her following which she filed a police complaint. A UK court passed a two- year restraining order in 2017. The plaintiff found her intimate pictures posted on Twitter, Instagram, YouTube, etc, which were taken when she was a minor. She filed a complaint in the Cyber Crime Department of the Delhi Police against this.

It is necessary for the social media platforms to take measures effectively for preventing child pornography to be hosted on their platforms.

In furtherance of these platforms were directed to remove the pictures of the plaintiff. The police authorities were also directed to use the protocols and resources available with National Crime Reports Bureau and other concerned agencies for identifying the persons who are re-uploading the offensive content in India, so suitable actions could be taken in accordance with the law.