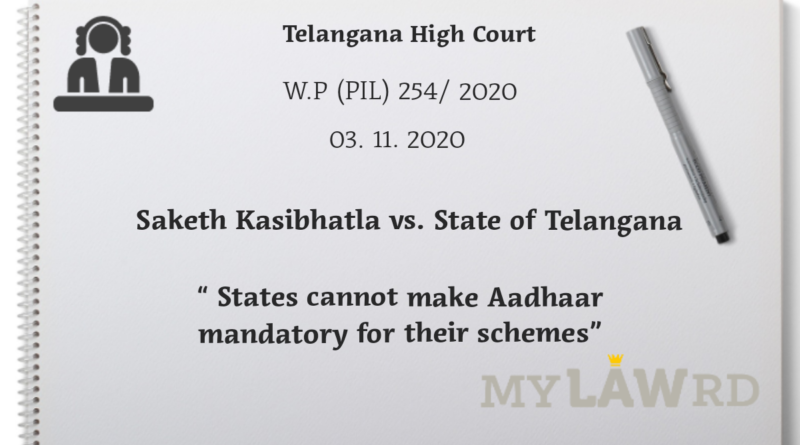 This case discusses the validity of the Telangana Government’s requirement of Aadhar details of citizens. The Telangana Government introduced ‘Dharani’ Portal, a land reform initiative. This was the government’s one of the attempts to make Aadhar mandatory and collect details of citizens as part of its ambitious land reform scheme. The petitioners challenged the State’s decision of collecting Aadhar details from agricultural and non-agricultural property owners.

The state’s insistence of making Aadhar mandatory is violative of the KS Puttaswamy judgment pronounced by the Supreme Court which upheld the right privacy.

The court noted that according to the Aadhar Act, 2016. Aadhar details can only be used for welfare schemes and the Telangana Rights in Land and Patidar Pass Books Act, 2020, nowhere prescribes the collection of details by means of Aadhar.

The court further went on to observe that the balance of convenience is in favor of the petitioners as the State would not lose anything if Aadhar details were not provided but the citizens would be forced to reveal their personal data and were exposed to the risk of losing vital personal information.

The court by means of an interim order has directed the state government to not make Aadhar mandatory and collect Aadhar information for the purpose of the scheme.