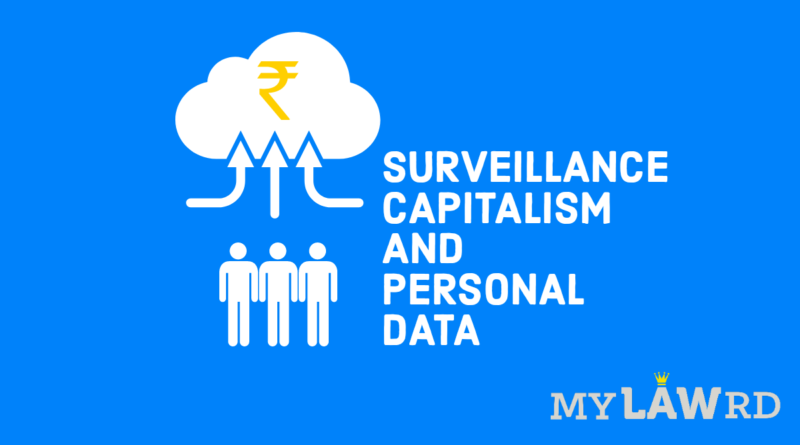 Personal data and surveillance have been at the forefront of discussion in the rapidly progressing technological world. Big Data i.e., the accumulation of massive amounts of personal data, and increased use of it to influence the behavior of public is a growing threat.  The average internet user is no longer amused to see sites like Facebook, Google, and Instagram showing ads on subjects in which they have previously expressed interest online. But surveillance of individuals using sensitive personal data is no longer just a lucrative activity to the State, but also for private entities too. Here are some of our thoughts on surveillance capitalism and personal data protection.

The word ‘Surveillance Capitalism’, was first used by Shoshana Zuboff. It is a phenomenon where companies ‘commodify’ personal data with the aim to make profits and create markets by manipulating individual behavior. She analyzes the dimensions of surveillance capitalism through the lens of the institutionalizing and operational assumptions of Google Inc. This issue becomes important due to increased intervention of companies like Google, Facebook, and others in dealing with personal data resulting in people losing the autonomy of decision- making to these tech world giants.

Thanks to the Cambridge Analytica, the possibility of personal data being used to interfere with elections, striking at the very core principles of democracy, was exposed. Political micro targeting and voter analytics are a form of surveillance aimed at manipulating voting behavior of individuals, creating a new market for political consulting. This phenomenon has been further highlighted after the Cambridge Analytica scandal surfaced. Although Big Data can be harnessed in the future as a powerful tool for national security and the public welfare at large; currently, the threat it poses for individual privacy is worrisome.

India’s Personal Data Protection Bill, 2019 aims to recognize this issue by terming it ‘profiling’ by use of data’. The bill mandates additional safeguards, where personal data has been used repetitively for purposes of profiling, and allows for profiling only after intermediaries undertake a data protection impact assessment. It also extends enhanced protection to profiling of data concerning children. The draft bill hopes to regulate business models that are in the market of profit making through surveillance of individuals and processing their sensitive personal data. Data is the new oil and at the rate which emerging technologies are becoming integral to an individual’s lifestyle, Big Data is no longer big but enormous.

Although the bill is proactive in recognizing and providing the safeguards to profiling, it is still unclear how this issue will be addressed, as there are no definitive provisions/rules for the same. The bill also remains unclear on the extent of the regulation applicable to profiling. This uncertainty has led to speculation that stringent regulations will result in stagnant technological innovation and entrepreneurship. Hence, the draft bill has to be clear on how it intends to regulate surveillance using data, especially surveillance by businesses.

The challenge is imminent given that individual rights need to be reconciled with the rights of businesses operating models built on utilizing big data. Given that business models are increasingly looking at data analytics and processing, excessive regulation will act as a barrier to the ease of doing business, which in turn will have an adverse effect on innovation and the economy.

However, in the Indian scenario the problem is not even about over regulation. Rather, it is about the uncertainty created by the Personal Data Protection Bill. All said and done about capitalist business models wanting to utilize big data to influence human behavior, it is however the first word in ‘Surveillance Capitalism’, which is far more menacing in character.

Not to ‘lead by example’

Surveillance has always been the State’s forte. The bill gives wide powers to the government to exempt any governmental agency from the applicability of the provisions of the bill. This has only added to increased skepticism on how right to privacy will be given effect to. The implications are broad, to the extent that state-owned companies can also indulge in utilizing big data to alter citizen behavior and act as serious competitors in the market. It, thus, becomes important to deliberate on how the draft Personal Data Protection Bill, 2019, aims to reconcile individual rights with the right of doing business, in the backdrop of a system which still gives the State unchecked powers to intrude on the privacy of its citizens. It is imperative, that a right balance be found between surveillance capitalism, and personal data protection.