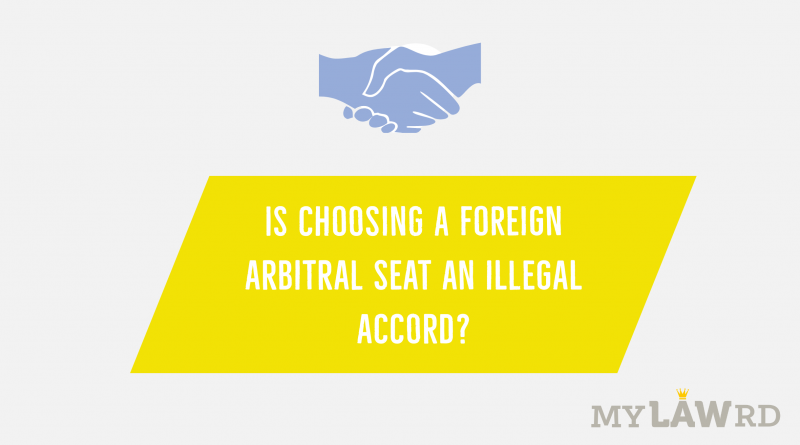 This article stands to discuss an unresolved mystery about Arbitration. To be more specific-the Governing law which is stated in a contract. It’s a grey area of law. Judgments have created an abstruse between practical implementation of the arbitration law and its theoretical presentation. This article stands for understanding whether derogation of Indian Laws while deciding the seat of arbitration opposes the public policy regarding contracts, or not?

To begin with, drafting of a contract requires immediate attention to many important clauses. Some of these are the clauses related to payments, duration, termination, responsibilities of parties, etc. However, the most underrated yet important clause is the Governing or Dispute clause. The Governing Law clause is the clause which gives a complete structure to the contract. Parties may denote the chosen course of action, to be taken in case of a dispute.

Parties to a contract often point out that the way of resolving the dispute would be the method of arbitration. Arbitration is a party oriented method of dispute resolution. It is an out of the court settlement wherein parties’ autonomy must be valued. Therefore, consent of arbitration much be absolute and irrevocable and must be stated through a written agreement.

Having said that, such autonomy is disturbed while deciding the seat of the arbitrator. Section 20(3) of Arbitration and Conciliation Act,1996 enables the arbitration tribunal to meet at any place of convenience, for conducting hearings, and in matters such as consultations among its members for hearing witnesses, experts or the parties. However, the apex court has still not countered the question that can Indian contracting entities choose a foreign law/ foreign seat for arbitration? Section 28 of Arbitration and Conciliation Act, 1996, clearly mentions that for any arbitration situated in India, the India law would apply except in International Commercial Arbitration as defined in the Act.

In Atlas Export Industries v. Kotak & Company (1999) 7 SCC 61, parties entered into a contract for trading of a certain quality of product. But a dispute ascended on failure of shipment of the product. Thereafter, both the parties resorted to arbitration and appointed their own arbitrators. The arbitral award was in favour of Kotak and subsequently, it moved to the Bombay High Court for enforcement of the award. Atlas pleaded before the High court that was no agreement in writing between the parties requiring the disputes arising out of the contract being referred to arbitration in accordance with the arbitration rules of GAFTA (Grain and Food Trade Association Ltd., London.). Hence, the award should be held to be unenforceable as the contract between the parties relating to arbitration was opposed to public policy under Section 23 read with Section 28 of the Contract Act.

The Supreme Court permitted these two Indian Companies to refer their dispute to a foreign seated Arbitration. Yet, the apex court while upholding the arbitral award did not answer the question which could settled proposition.

Similar to this controversy, in Sasan Power Ltd. v. North American Coal Corporation India Private Limited (2016) 10 SCC 813, the Madhya Pradesh High Court affirmatively held that two Indian parties can have their dispute referred to a foreign seat of arbitration. The High Court while discussing the Atlas case held that two Indian origin parties are free to choose the foreign seat for arbitration. Similarly, in Reliance Industries Ltd. Vs. Union of India [(2014) 7 SCC 603, the arbitration seat was London. The defence stated that it was a violation of public policy but the court abruptly denied and rewarded the arbitral award.

However, the Bombay High Court challenged the earlier judgements in M/s Addhar Mercantile Private Limited v. Shree Jagdamba Agrico Exports Private Limited (Arbitration Application No 197 of 2014 along with Arbitration Petition No 910 of 2013)( 2015 SCC OnLine Bom 7752)  and held that if both the parties are Indian and agree for arbitration, then they cannot undermine the Indian Law by choosing a foreign seat of arbitration and a foreign governing law. If such a thing happened then it would be against the public policy in respect of Indian Laws.

These precedents are still unclear about the choice of a foreign seat for arbitration and foreign laws by Indian entities and create a tight spot of choosing what’s right and wrong. Therefore, Indian Companies/ Parties are facing practical abstruseness in law.

Critics to this controversy will follow. One part would argue that there is absolutely no option to choose foreign laws and a foreign seat for disputes and thereby derogate from the  Indian Law, when the contracting entities are Indian. Another would argue that it shall be the irrevocable decision of parties or entities coming into a contract as to whether or not to choose India as the place and governing law. That the parties’ autonomy in arbitration agreements is supreme. Some would also argue to have some nexus with the international law perspective and reason that International Arbitration should prevail among the parties, enabling them to decide the foreign law and seat for arbitration.

I happen to be in support of the notion, that Indian Parties while coming into a contract must choose the Indian Law and avoid going against the public policy. Below I denote few of the major reasons as to why parties should choose Indian Law and Indian Seat; following may help business managers and Legal department of companies on the negotiation table.

Time and Length of process

Under the recent amendments in Arbitration and Conciliation Act, arbitral tribunals are required to make their award within a period of 12 months for all the arbitration proceedings. Thus, it gives a chance to the parties to resolves their dispute within a limited time frame. It is not only time efficient but cost effective too. Indian courts are notorious for endemic delays in resolving commercial dispute. Arbitration can be a quicker. Although the parties may extend the timeframe for next 6 months, but it requires the court’s consent.

This introduction in the act had a notable impact on Indian Arbitration, as in my experience a case which began in 2019 was completed in 12-18 months. Parties and business doesn’t have to wait for long, losing all the time and assets in resolving a dispute which can take a heap if not solved. However, if a foreign seat is chosen for resolving the dispute between parties, then the above mentioned timeline may not be enforceable and the arbitration may take substantially longer to compete.

Interim Relief is the ability of a party to obtain interim relief is central to the efficacy of arbitration, for instance, a party might require a freezing injunction to prevent the other party from dissipating its assets during the pendency of the arbitration.

Indian parties can approach Indian courts for granting interim relief in Arbitration proceedings in India or outside. For instance, if the tribunal is seated outside India, then interim order issued by that tribunal may not be enforceable under the Indian Law. Unlike US courts, they may also enforce interim measures only by the order of an arbitral tribunal, even if the arbitration is not seated in United States. Thus, Indian Court have the power of granting interim measures which can provide immediate relief and also save a lot of time and cost.

India is a signatory to the NEW YORK CONVENTION on the recognitions and enforcement of Foreign Arbitral Awards. For instance, if the parties set out the dispute and decide to go by the Indian Seat, then arbitral awards decided by the Indian Tribunal would be applicable to all the signatory countries. 50 countries have signed up for the New York Convention. Having said that, party who has been awarded would be at a beneficial position and there will be a less of chance for any fresh suit. Thus, saving time and money.

Indian Laws are facing a challenge in implementing the foreign arbitral awards. At the time of implementation, it could be argued that two or more Indian entities/ parties cannot choose foreign law and seat over the Indian Law. It could be argued to have derogated the Indian Law and it could be against the public policy and such arbitral award which derogated from Indian Laws is null and void. Indian Parties and Entities should be cautious in applicability of any such clause in the contract which makes the contract compete against Indian Laws.

In the current situation when India is set out for progressive arbitration means, we can only hope for the Government of India to clarify upon the issue, or the Supreme Court to lay down some directives to conclude this matter and clear out the unsettled dust.