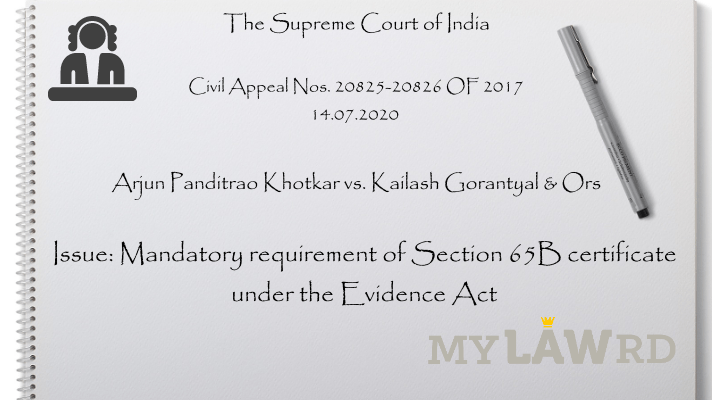 Ajrun Pantirao Khotkar vs. Kailash Gorantyal & Ors.(Civil Appeal Nos. 20825-20826 of 2017) was referred to a bench of three Hon’ble Judges of the Supreme Court by a Division Bench. The reference was made with regard to the interpretation of Section 65B of the Indian Evidence Act, 1872. Since the law laid down in State v. Navjot Sandhu [(2005) 11 SCC 600], was overruled by a bench of three judges in Anvar P.V. v. P.K. Basheer & Ors. [(2014) 10 SCC 473), laying the law down on Section 65B, this case was referred to a three-Judge Bench. However, Section 65B had already gone through 13 years of different interpretations, all the way from Navjot Sandhu to the latest judgment of the Supreme Court in Shafhi Mohammad v. State of Himachal Pradesh [(2018) 2 SCC 801]. Therefore, it was necessary to lay down the law for good and end the multiplicity of opinions. The bench comprised of Justice R.F. Nariman, Justice S. Ravindra Bhat, and Justice V. Ramasubramanian. Two separate concurring judgments were written by Justice Nariman and Ramasubramanian. So, here’s all that the Supreme Court said in Arjun Panditrao Khotkar on Section 65B.

What is Arjun Panditrao Khotkar all about?

Afterwards, the respondent approached the Bombay High Court and sought to rely upon video-camera arrangements (CCTV) that were made both inside and outside the office of the Returning Officer. The Bombay High Court order the Election Commission and the concerned official to “produce the entire record of the election of this constituency, including the original video recordings.” The High Court also made a specific order that the record needs to be produced along with the necessary certificates. The Election Commission complied with the order and gave the videos in CD/ VCD form. The transcript of the video was prepared in the High Court itself. However, the officials did not produce the 65B certificate despite the order, and despite repeated requests of the respondent. The respondent even went to the Chief Election Commissioner but he did not receive any reply regarding the issue.

Upon such a conduct of the Election Commission and its officials, the High Court concluded that the officials were not giving the 65B certificate to cover their mischief. The CDs produced by the Election Commission could not be treated as original, and as such had to be proved by means of secondary evidence. In absence of the certificate, the CDs could not be admitted in evidence altogether. Therefore, the High Court set out to decide the case on the basis of the cross examination of the Returning Officer.

The returning officer had given evidence on oath that the video cameras were regularly used and the record was created as the record of activities of the Election Commission. The returning officer further stated that the VCDs were marked of the recording under her instruction. This testimony was held as ‘substantive evidence’ as the conditions of 65B were fulfilled by the contents of the testimony. The High Court also noted that since the Election Commission and its officials had avoided to give the certificate, and the contents of the testimony were a ‘statement under oath’, while the certificate itself is issue don the basis of ‘best of knowledge’ and ‘belief’. On these grounds the High Court declared the election of the returning candidate as void.

Decision of the court

The court held the following:

-> Section 65B (1) differentiates between the original information contained in the computer itself and copies made therefrom, the former being primary evidence and the latter being secondary evidence. Section 65B (4) is unnecessary if the original document itself is produced. [as held by another three-judge bench in Vikram Singh and Anr. V. State of Punjab and Anr. (2017) 8 SCC 518]

->Tomaso Bruno and Anr. V. State of Uttar Pradesh (2015) 7 SCC 178 (three Judge bench)- held that the judgment is contradictory in itself. The bench referred to Anvar P.V. and Section 65A, but then again laid down that secondary evidence of the contents of a documents can also be led under Section 65 of the Evidence Act to make CCTV footage admissible.

-> Shafhi Mohammad v.State of Himachal Pradesh [(2018) 2 SCC 801]- The two judge bench had formed an opinion that it would be wrong to deny the law of evidence advantages to be gained by the new techniques and new devices, provided the accuracy of the recording can be proved. The decision to carve an exception to the Section 65B (4) rule was based on this opinion. It was held that if the electronic evidence is authentic and relevant, and wherever the interest of justice requires, the same can certainly be admitted subject to the court being satisfied about its authenticity and procedure for its admissibility may depend on fact situation such as whether the person producing such evidence is in a position to furnish certificate under Section 65B (4).

However, the present bench overruled the decision and held that the judgment had largely relied upon Tomaso Bruno to hold that provision under 65A and 65B of the Evidence Act are by way of a clarification and are procedural provisions. Further, the precedents relied upon were adjudged before the year 2000, when the Information Technology Act, 2000, was not enacted, and no amendments were made to the Evidence Act.

Paras Jain v. State of Rajasthan 2015 SCC Online Raj 8331 & Kundan Singh v. State 2015 SCC Online Del 13647- So long as the hearing in trial is not yet over, the requisite certificate can be directed to be produced by the learned Judge at any stage. However, it shall be subject to the rights of the accused against any irreversible prejudice.

What shall the aggrieved party (prosecution as well as the accused) do if he is unable to procure the certificate?

“The reasoning of the difficulty of producing a certificate by a party who is not in possession of an electronic device is also wholly incorrect.”

If the party adducing the evidence is not able to procure the certificate, the court can always record to Section 165 of the Evidence Act, Section 91 of the Cr.P.C, and relevant provisions in the CPC for Summoning and Attendance of Witnesses. It is to be noted that under the Cr.P.C, non-compliance of an order under Section 91 can result into imprisonment or committal of a person refusing to answer or produce the document, under Section 349 of the Code.

Who can give the certificate?

Any person out of several persons who occupy a ‘responsible official position’ in relation to the operation of the relevant device, as also the person who may otherwise be in the ‘management of relevant activities.’

When shall the certificate be produced in court?

In this regard, the court held that as per the laid down jurisprudence under Section 207 of the Cr.P.C, the electronic evidence has to be furnished at the latest before the trial begins. The sole reason being to give the accused a fair chance to prepare and defend the charges levelled against him during the trial.

The general principle in criminal proceedings therefore, is to supply to the accused all documents that the prosecution seeks to rely upon before the commencement of the trial. The requirement of such full disclosure is an extremely valuable right and an essential feature of the right to a fair trial before its commencement. It is also a settled principle that the prosecution ought not to be allowed to fill up any lacunae during the trial. The only exception to this general rule is if the prosecution had ‘mistakenly’ not filed a document, the said document can be allowed to be placed on record.

If the certificate is ought to be placed on record after the commencement of the trial, the exercise of power by the courts in criminal trials in permitting evidence to be filed at a later stage should not result in serious or irreversible prejudice to the accused. A balancing exercise in respect of the right of parties has to be carried out by the court, in examining any application by the prosecution under Section 91 or 311 of the Cr.P.C or Section 165 of the Evidence Act. Depending on the facts of each case, and the Court exercising discretion after seeing that the accused is not prejudiced by want of a fair trial, the Court may in appropriate cases allow the prosecution to produce such certificate at a later point in time.

What precautions shall the telephone company or ISP take, when it produces CDRs or any other requested data?

The court held that in such cases, if the police fail to secure those records, or secure the records but fail to secure the certificate within the stipulated period of one year (1 year as mandated by DoT licensing conditions to preserve and store the records), the production of a post-dated certificate would render the data unverifiable in all probability. The reason is that the record might not even exist at that time and the accused would not be able to challenge the genuineness of the certificate by seeking opinion of the Examiner of Electronic Evidence under Section 45A of the Evidence Act.

Therefore, the court issued directions to maintain CDRs and other relevant record for the concerned period in a segregated and secured manner if a particular CDR or other record is seized during investigation in the said period. Any concerned party can then summon such records at the stage of defence evidence, or in the event such data is required to cross-examine a particular witness.

How was Arjun Panditrao Khotkar concluded?

The court cited two legal maxims. “lex non cogit ad impossibilia” and “impotentia excusat legume”. The meaning of them being that the law does not demand the impossible, and that where there is a disability that makes it impossible to obey the law, the alleged disobedience of the law is excused. On facts of this case, the court held that the respondent has done everything possible to obtain the necessary certificate, which was to be given by a third-party over whom the respondent had no control. Therefore, the respondent must be relieved of the mandatory obligation contained in the sub-section. Also, apart from the evidence in the form of electronic record, other evidence was also relied upon to arrive at the same conclusion. Therefore, the High Court’s judgment was upheld and the election of the candidate was declared void.

The original judgement can be read here.

4 thoughts on “Arjun Panditrao on Section 65B: All that the Supreme Court held”