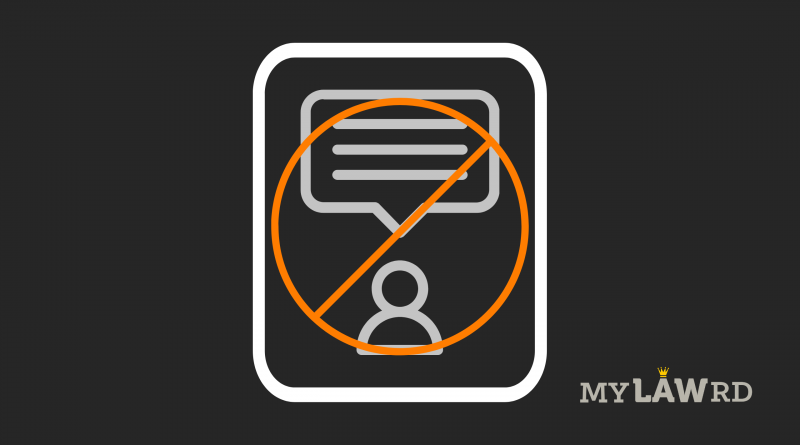 Fundamental Rights establish the rule of law and give the people a fair protection against arbitrary state action. One such right is the right to Freedom of Speech and Expression (yes, we need to be reminded of it). It is essential for sustenance and smooth working of the democracy. The idea is that individuals are free to express their thoughts and opinions as they like, without fearing for their life and liberty. The democracy would become a dictatorship if the state actively silences individual voices, choices and beliefs. The recent cases of Sameet Thakkar & Sunaina Holey, once again remind us of alarming and illegitimate (de jure) state control on free speech.

State will be state- encroaching upon our rights. The people in power tend to put the power to their own use, not to mention as per their own whims and fancies. Nevertheless, while there are sides that stand in favor of absolutism, the law of the land prefers to strike a healthy balance between free speech and some of its limitations. Now that the internet has decentralized articulation of opinions, India has been increasingly witnessing cases of illegal suppression of voice. Not just newspapers, but the common people are also facing censorship.

The controversy had surfaced, hysterically, in Maharashtra for the first time. It was Bala Saheb Thackeray whose death was commented upon. Since then, cases have occurred throughout the country: U.P, Bengal, Karnataka, Puducherry, and Goa, to name a few states. It’s a pity that the police continues to register cases under the now abolished Section 66A (vide the Supreme Court judgment in Shreya Singhal v Union of India) , even after several reprimands by various High Courts and even by the Supreme Court. Maharashtra is once again under the lens for illegal arrests of Sameet Thakkar & Sunaina Holey.

Both were arrested, from Nagpur and Mumbai, for making derogatory remarks on the Chief Minister of Maharashtra and his son. Various accusations have been made from both the sides. One of them advocates the right to free speech and expression whereas the others support the arrests citing the use of derogatory speech as unacceptable. But reiterating the Supreme Court in Shreya Singhal, what may be offensive to one may not be to another!

In Sunaina Holey’s case, she criticized the CM and his son, who happens to be another minister in the Maharashtra government. Her tweet was followed by a complaint filed against her, by Shiv Sena activists, for using morphed pictures. She was later arrested by the Mumbai Police under various charges including Section 153A (promoting enmity between different groups on grounds of place of birth, residence and doing acts prejudicial to maintenance of harmony) and Section 505(2) (statements creating or promoting enmity, enmity, hatred or ill-will between classes) of the Indian Penal Code.

Two days after she was granted bail, Sunaina was arrested yet again, this time ‘after sunset’ (women can’t be arrested after sunset). What is more appalling, is that she was released on bail in the first case and was asked to visit the relevant police station every Friday for three weeks. It was one of the visits when she was arrested again, from the police station, despite the police knowing that a case was ongoing for the same set of facts. The subsequent arrest was for another complaint filed against her under Section 294 (using obscene language in public place), 506 (criminal intimidation), and Section 499 (defamation) of the IPC.

In Sameet Thakkar’s case, he was arrested for calling the CM’s son, ‘baby penguin’. He was booked for defamation, Section 292 (using obscene words in public) and Section 67 (transmitting obscene material in electronic form) of the Information Technology Act, 2000.

Questions on nature of arrests

The nature of arrests and the procedure followed by the Mumbai Police raise questions which revolve around violation of fundamental rights and the Code of Criminal Procedure. Some of them are:

-> The arrest of a person for the same offence twice is violative of Article 20(2) of the Constitution of India. The principle of Double Jeopardy is involved.

-> Violation of Section 46(4) of the Cr.P.C which states that no woman can be arrested after sunset or before sunrise. If exceptional circumstances exist, a woman police officer shall, by making a written report, obtain the prior permission of a Judicial Magistrate of the first class within whose local jurisdiction the offence is committed or the arrest is to be made. The Bombay High Court Judgment in the case of Mrs. Bharati S. Khandar v. Shri Maruti Govind Jadhav ruled that “a woman can’t be arrested after and before sunrise”.

->As per, Section 41A, in any offence which is punishable with imprisonment of up to seven years, a notice for appearing at the police station is to be served. However, no notice was served to the accused in both cases.

The sorry state of Free Speech

There are two sides to any coin. While some suggest that no speech shall be censored, some are of the view that an individual’s right to free speech and expression can be curbed only in extraordinary and justifiable circumstances. Needless to say, the sections imposed in both these cases are an overreach on free speech.

Criticism is an integral part of our country, and there shall be no attempt to muzzle it. The impetus on political leaders to be tolerant is all the more, to firmly establish the rule of law, and practice the constitutional values (with great power, comes great responsibility). But to the shock of our conscience, governments are using power in unauthorized and most arbitrary ways. It is a naked exhibition of Idi Amin’s words, “I can guarantee freedom of speech, but I can’t guarantee freedom after speech”. The cases of Sameet Thakkar & Sunaina Holey are a living evidence.

This article was written by Ms. Anusha Mishra, an Economics graduate, and a 2nd year student of law from Bharati Vidyapeeth’s New Law College, Pune.