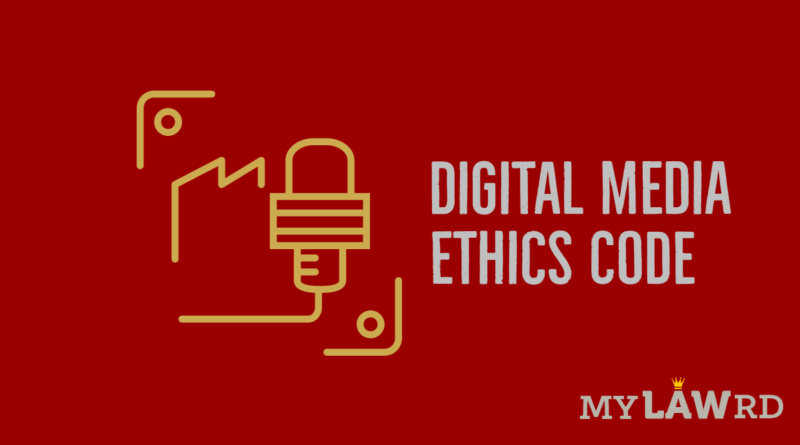 The Bombay High Court has stayed the operation of the digital media ethics code, a part of the Intermediary Guidelines, 2021. Rule 9(1) and 9(3) of the Information Technology (Guidelines for Intermediaries and Digital Media Ethics Code) mandate digital news media publications and online publishers to follow a “Code of Ethics”.

The Challenge to the Rules

The petitioners specifically challenged Rule 9 (Observance and adherence ot the Code), Rule 14 (Inter-Departmental Committee), and Rule 16 ( Blocking of information in case of emergency).

Rule 9 mandates a publisher of digital media or news to adhere to the Code of Ethics, and address grievacnes following a three-tier structure. Level I – Self-regulation by publishers, Level II- Self regulation by the self-regulating bodies of publishers, Level III- Oversight mechanism by the Central Government’s Inter- Departmental Committee. Any publisher who fails to follow the rules risks prosecution under any contravened law.

Detailing the three-tier structure, Rule 14 provides for an inter-departmental committe which the Ministy of Informaiton and Broadcasting (MIB) shall constitute. This comittee shall hear grievances in respect of the decisions taken at Level I or II of the three-tier mechanism.

Lastly, Rule 16 provides for blocking of information in case of emergency. As per the rule, an authorised officer shall examine relevant content. If the content falls within the grounds referred to in Section 69A of the Information Technology Act, 2000 (IT Act), he can recommend blocking of such content to the MIB.

Contention of the Petitioners

The petitioners challenged the 2021 rules on the ground that they are ultra vires the Information Technology Act, 200 and the provisions of Article 14, 19(1)(a) and 19(1)(g) of the constitution.

Senior Advocate Darius Khambata, appearing for the Leaflet argued that the 2021 rules transgress the rule making power available under Section 89 of the IT Act. Moreover, they go beyond the restrictive ambit of Section 69A of the IT Act to lay down restrictions and control on free speech. A subordinate legislation cannot control

” It is submitted that the chilling effect is of such extent that a citizen who is enjoying a fundamental right of free speech and expression is dissuaded from writing articles or disseminating information because the sword of fear of an adverse/penal action that could be taken under the 2021 Rules hangs on him, and that would amount to an unreasonable restriction not saved by Article 19(2).”

Appearing for Nikhil Wagle, Advocate Abhav Nevagi argued that the government canont exercise powers of censorship unless the information falls within the parameters of Article 19(2) of the Constitution. Further, he argued that the rules are “patently in the teeth of the principles as laid down by the Supreme Court in its decision in Justice K.S. Puttaswamy v. Union of India (2017) 10 SCC1.” Besides, he also remearked the rules to be an attempt to overcome the mandate of the law laid down in Shreya Singhal v. Union of India, (2013) 12 SCC 73.

Mr. Anil Singh, learned ASG, appeared for the government. Regarding Rule 14, he submitted that there is no urgency since the government is yet to constitute the inter-departmental committee. He further argued that no adverse action has been initiated so far against the petitioners. Hence, it cannot be presumed that there is a cause of action for filing these petitions.

Drawing the Court’s attention to the governemtn’s affidavit, Mr. Singh argued that out of 1800 digital media publishers, 97% publishers of news have not challenged the house. He also contended that the Court should not consider the prayers for interim relief as the Union of India has filed a transfer petition seeking transfer of all petitions pending before various High Courts.

Reasoning of the Court– on transgression of the rules

Firstly, the Court opined that there is no immediate urgency regarding Rule 14 since the government is yet to constitute the inter-departmental committee. It is also yet to appooint the authorized officer as under Rule 13(2). The court, therefore, granted the liberty to the petitioners to urge for a relief on this issue when the committee comes into effect.

The Court also refused to grant any interim relief with regard to Rule 16.

About Rule 9, the court observed that the rules obligate adherence for news and current affairs content to norms of Journalistic Conduct of the Press Council of India under the Press Council Act, 1978 (PCI Act); and of the Programme Code prescribed under Section 5 of the Cable Television Networks (Regulation) Act, 1995 (CTVN Act). [Read Appendix 1 to the rules]

The Court found such an obligation to be a completely different statutory regime alient to the IT Act. Further, the Central Government does not have any pwer under Section 87 to frame rules contemplating such provisions under clauses (z) and (zg) of sb-section (2). It concluded that Rule 9 appears to be ultra vires the provisions of the IT Act being beyond the delegated power.

“It is prima facie difficult to comprehend as to how such fields which stand occupied by independent legislations can be brought within the purview of the impugned rules and substantive action can be taken for their violation under the impugned rules.”

After addressing the statutory transgression of the 2021 rules, the court observed that the guidelines framed by the Press Council of India lay down standards of conduct that journalists shall strive to maintain. There is only moral sanction behind the code, and not statutory. The PCI Act only lays down provisions to warn, censure the newspaper, or disapprove the conduct of the editor or the journalist, which is contrary to what the 2021 rules lay down.

Similarly, the CVTN Act only intends to provide various “do’s” and “don’ts”. They may be relevant for a programme, but do not bind publishers of content on the internet to express views which many not be decent.

The Court ultimately remarked that with the 2021 Rules in place, one would have to think twice before criticizing any such [public] personality, even if the publisher may have good reasons to do so. It also said that it is quite possible that any publisher on contravention of the Rules, without even transgressing the boundaries set by Article 19(2) of the Constitution, may expose himself to punishment.

“The indeterminate and wide terms of the Rules bring about a chilling effect qua the right of freedom of speech and expression of writers/editors/publishers because they can be hauled up for anything if such committee so wishes. The 2021 Rules are, thus, manifestly unreasonable and go beyond the IT Act, its aims and provisions.”

After all the deliberation, the court directed a stay of operation of sub-rules (1) and (3) of Rule 9 of the 2021 rules as an interim relief.

You can download the full order using this link.Download